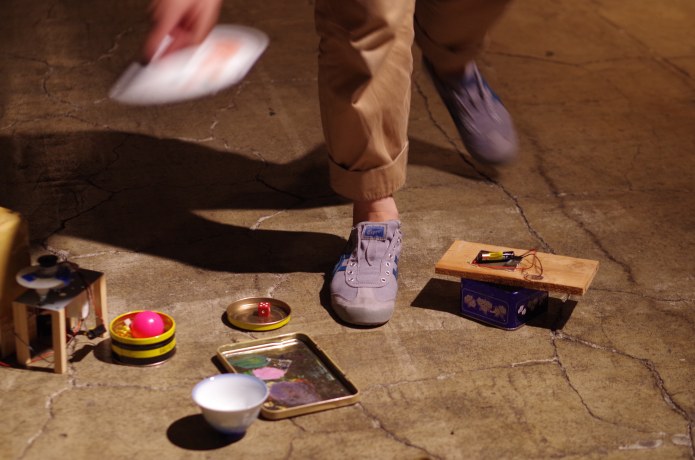 Japanese artist Rie Nakajima first caught my ears at the Purcell room, at London’s Southbank Centre in January 2014. She used tiny electronic assemblages to map out sounds in the grand concert hall. Her work, often described as ‘responding to architecture’ could be interpreted as sketching with sound; each sonic gesture offering a new impression of the space. She took us on a journey from inside the house grand piano up the steps around the seats and back across the stage in a rambling kind of goose chase -that challenged not only the concept of music but of performance. Virtuoso truly dead, she becomes unseen and we are lured into a sonic zone of articulation though understatement and slightness. Her movement purely functional rejects any hint of performative gesture. Echoing Cage, her presence acts merely as a sound enabler. And her sounds are small; playful secrets spoken in the hidden corners of this impressive space. They could be read as timid, and many in the audience were reluctant to listen as if such a quiet delivery demanded too much. But this provocation in itself was surely a wonderfully conceited position. Her little mechanical sounds whispered through the cracks of the building, claiming it for itself while possibly mocking the ghosts of grandiose musicians of the past..

Last week I had the chance to reflect on that experience as I witnessed Nakajima’s mini electronic orchestra put to test in a very different architectural space. Q-02, Brussels, hosted an evening of Japanese sound art as part of Performatik 2015. This time the audience was patient and quiet, attentive to every tiny ‘breath’ of the piece. The dramatic tension of the Purcell Room was missing. Although playful, the enquiry with paper flags and other various objects within this intimate studio setting seemed to lose its grip quite early on, and as we were very well prepared for a performance where ‘the little things take centre stage’ the understatement of it all was somehow too nicely delivering ‘on message’; cheeky conceit quickly dissolving into cute conclusions. The context somehow untethered the setup. But are we inevitably destined to be disappointed if we have great expectations of tiny things? Stay tuned as Nakajima returns to the Purcell Room next month to perform with David Toop.

Developing a post-digital lexicon for movement. R&D by Christine Ellison and Erato Tzavara at Black Mountain Beach, Peleponnese, February 2020. Scroll is based on a performance score and is part […]
Scroll
Loading Comments...
%d bloggers like this: