A DAY AND NIGHT OF NOISE CABARET 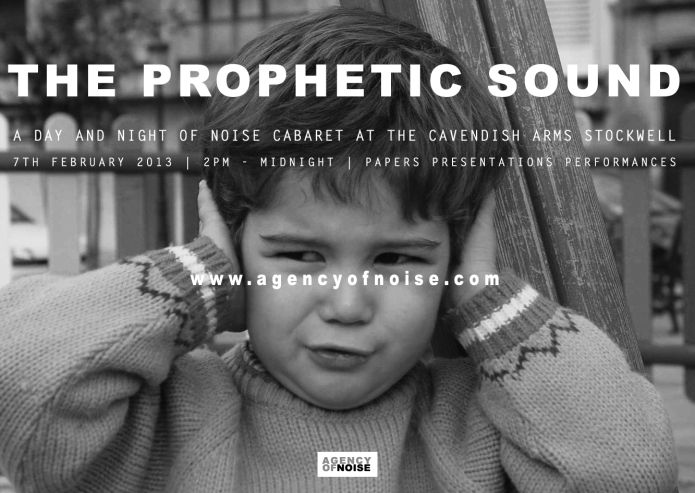 HOSTED BY AGENCY OF NOISE

A digital holocaust has occurred. Overnight everything with a microchip has malfunctioned. The world is dark. Does it collapse into chaos or do alternative approaches to communication, organisation and production emerge?

“Music is prophecy. Its styles and economic organization are ahead of the rest of society because it explores, much faster than material reality can, the entire range of possibilities in a given code. It makes audible the new world that will gradually become visible, that will impose itself and regulate the order of things; it is not only the image of things, but the transcending of the everyday, the herald of the future.” (Jacques Attali, Noise: The Political Economy of Music)

But what is music? At what point does the pattern, timbre, pitch, organisation, sequence of sounds become distinguishable from noise. If we agree with Attali’s argument for the prophetic power of music then it could be argued that noise must tell us things in an unbridled, unfiltered, less culturally coded way -before it becomes recognised, refined, manipulated and exploited for musical purpose.

Agency of noise presents a marathon of responses from artists, musicians and thinkers who challenge definitions of noise/music and the tensions between, through sonic-visions of new languages, new modes of composition, new sounds and new ways of processing noise. The event posits the notion of a post-digital era by emphasising works that use little or no digital technology; acts where performativity and liveness are key to the mode of production.

THE  PROPHETIC SOUND: A DAY AND NIGHT OF NOISE CABARET

Developing a post-digital lexicon for movement. R&D by Christine Ellison and Erato Tzavara at Black Mountain Beach, Peleponnese, February 2020. Scroll is based on a performance score and is part […]
Scroll
Loading Comments...
Comment
×
%d bloggers like this: