Noise at the University of Reading’s BA Art Degree Show 2013.

Naomi Davies | Let them have Pink!! 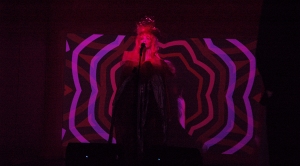 Pinkification explores the noise that is pink. In this mini opera that embraces excess through a collaging of techno beats and advertising imagery, I can’t quite decide if my senses are enduring or enjoying the assault. Pink screams at us as we are bombarded with the kaleidoscopic video. Snippets of flamingos, perfume bottles and handbags are just legible amongst an array of symbols and visual candy. And while all this is happening in the background, the figure in centre stage appears to be exorcising the word itself, with a set of operatic lungs and a terrified microphone: PPPPPPPIIIIIIIIIIIIIIIINNNNNNNNNNNKKKKKKKKKKKK!! She is eventually joined by a chorus-line that is as much Beecroft as Barney in its V-shaped formation. Adding to the frenzy they deliver each letter from P to K in an electro-pop style refrain. Visually seductive and sonically chaotic this is a sugary noisy feast that would be at home in a Baz Lurhman styled party at the court of Marie Antoinette!

Daisy Dixon | Causing a stir in the workplace. 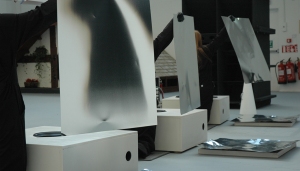 The formal installation of Dixon’s Drone is impressive. Nicely sanded amplifiers create a curved line in the gallery space leading to a mammoth speaker box that people are hesitant to stand close to in case it emits an unannounced bellow. Suddenly three performers dressed like factory workers enter the space with an ominous synchronicity each clanking a sheet of aluminium as they march on set. Their poise is proud but they are clearly subordinate to something other than the desire to work. Is this Metropolis revisited? Have these workers awoken to a force that compels a new kind of action? As they proceed to create a variety of noises and sound textures with the metal sheets against the surface of the amplifiers, images of trains, planes, thunderstorms and industry are conjured. The workers are clearly being conducted by the foreman who with an unspoken agenda, guides them through a series of fluent movements. It ends perhaps a little too soon. Having given up on trying to make sense of the signifiers I am only just settling into the noise for the sake of itself. The power of the sound is impressive, I can feel it reverberating in my breastbone and at times deep in my gut and I would have liked to revel in it’s shattering aggression a little longer before being dragged back to the visual symbolism of the ritual. A journey through the drone of industry and modern life the workers clock in and out with a bang. They will be back tomorrow for one last shift starting at 12noon. Check it out!

Daisy Dixon’s Drone will be performed one final time on Wednesday 12th June at 12noon (sharp) at the Department of Art, University of Reading.
Pinkification and Drone are part of the BA Degree Show 2013. For details of the exhibition see: http://www.degreeshow2013.com/index.html

Developing a post-digital lexicon for movement. R&D by Christine Ellison and Erato Tzavara at Black Mountain Beach, Peleponnese, February 2020. Scroll is based on a performance score and is part […]
Scroll
Loading Comments...
%d bloggers like this: